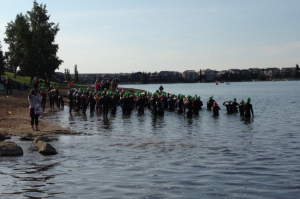 “The starting point of all achievement is desire.”
– Napoleon Hill

Would you ever do a triathlon?

It’s a simple question, yet most people would not compete in a triathlon because they are scared of the swim portion. And by scared, I mean terrified. They say they don’t know how to swim or couldn’t possibly swim the length that is required.

The swim is generally regarded as the hardest part of the tri for most people. And it’s easy to see why: Swimming is the most technique-oriented sport of the trio & most people aren’t naturally great swimmers. So rest assured, you are not alone.

These objections were what I initially thought, until I decided to do something about it. I resolved I would not let this fear keep me from competing in a triathlon. What did I do? I got a pass to the U of C pool and swam LOTS (the majority of my tri training consisted of swimming), got a swim coach, looked at swimming videos on YouTube and analyzed the best swimmers in the world (I.e. Michael Phelps & other elite Olympian’s) to see how the swim is supposed to look and tried to emulate their form each time I was in the water. To answer these swim objections for a tri race, there are 2 options: In the pool or open-water. I would advise starting off in a pool for your first triathlon and if you enjoyed it, then do an open-water swim for your second tri. That’s what I did & it worked out great.

“The first and best victory is to conquer self.”
– Plato

With this is mind, and as per the title, here’s the list:

26 Reasons To Do a Triathlon:

“The rewards for those who persevere far exceed
the pain that precedes the victory.”
– Karen Bliss Livingston, Elite road racer

This has been a summer of triathlons for me. I just completed my 2nd triathlon of the season this past Sunday, August 11, 2013. The race was held in the beautiful lake community of Lake Chaparral, in south Calgary. Although I wasn’t able to have trained as much as I had hoped, due to injuries, it was a great experience and I was able to improve on my overall time from the last triathlon I competed in earlier this summer.

Here are my thoughts for the Post-Race Recap:

– It was long! Apparently, the swim went longer than expected as we ended up swimming 900m instead of the 750m
– The first half started off well and I was swimming great, but gradually my arms began to get tired
– It was a different experience swimming with fellow competitors in my heat all at once. My strategy was to stick to the outsides to create more open-water to swim in
– It was my 1st time swimming an open-lake swim

– Went really well
– It was my strongest event and the sport I was the most confident at
– On my 2nd lap I took advantage of the downhill’s and pushed myself to gain faster speeds to compensate for the big uphill coming back
– The hill wasn’t as bad as I had anticipated; being a long, gradual uphill I was on my highest gear near the top but kept pushing myself
– The volunteers were really supportive and encouraging throughout the run course & helped me keep going

“Belief triggers the power to do.”
– David Schwartz

– Secured a spot at end of rack closest to the exit, a prime location
– Had clothes and equipment well-organized to ensure a smooth & quick transition for both T1 & T2

– Completed 2nd Sprint triathlon of the summer
– Beautiful location for the event at Lake Chaparral community
– Achieved my 2 goals for this race: 1) To finish and 2) Beat my 1st triathlon overall time (which I did by over 6 minutes)

“Never underestimate the heart of a champion.”
– Rudy Tomjanovich